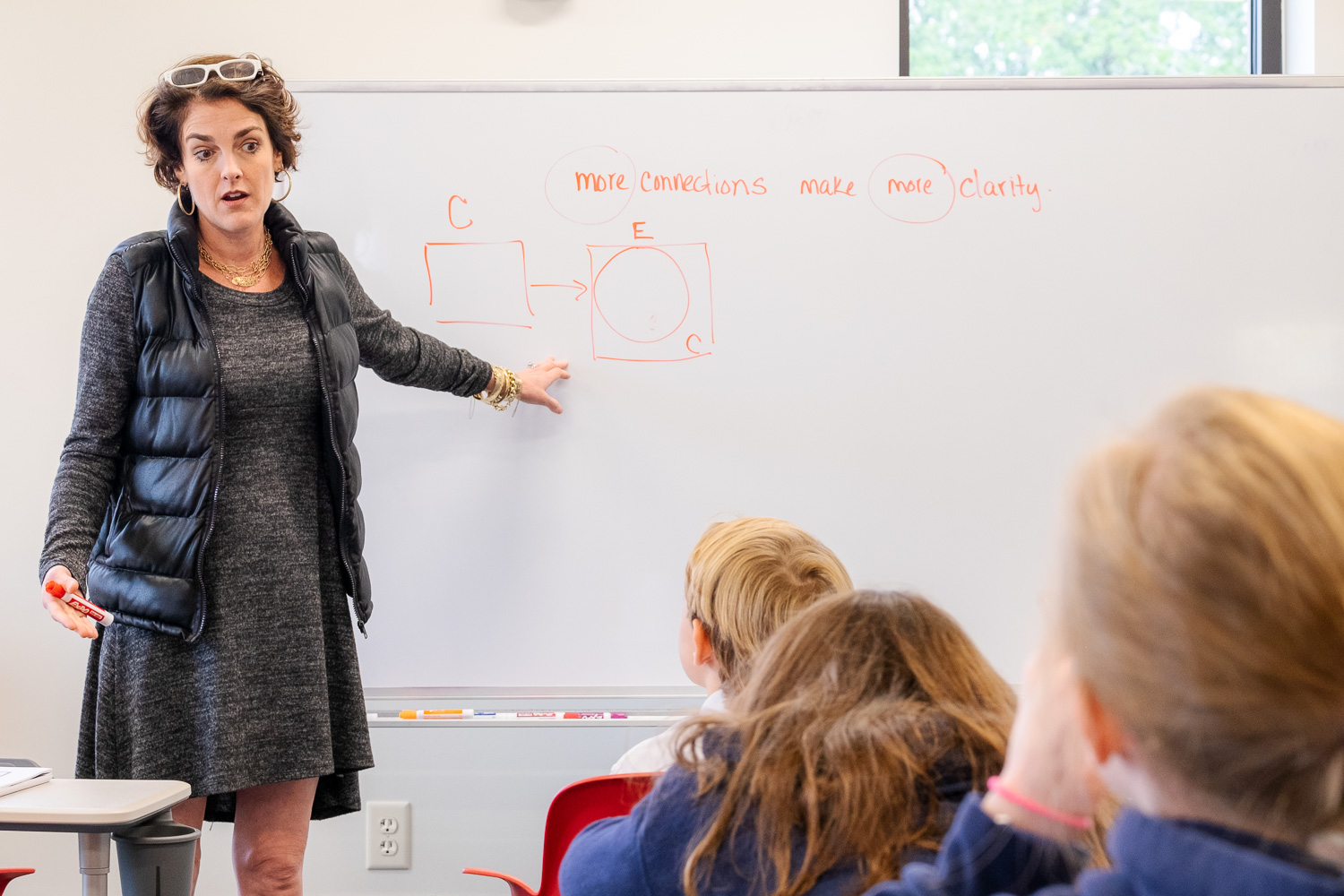 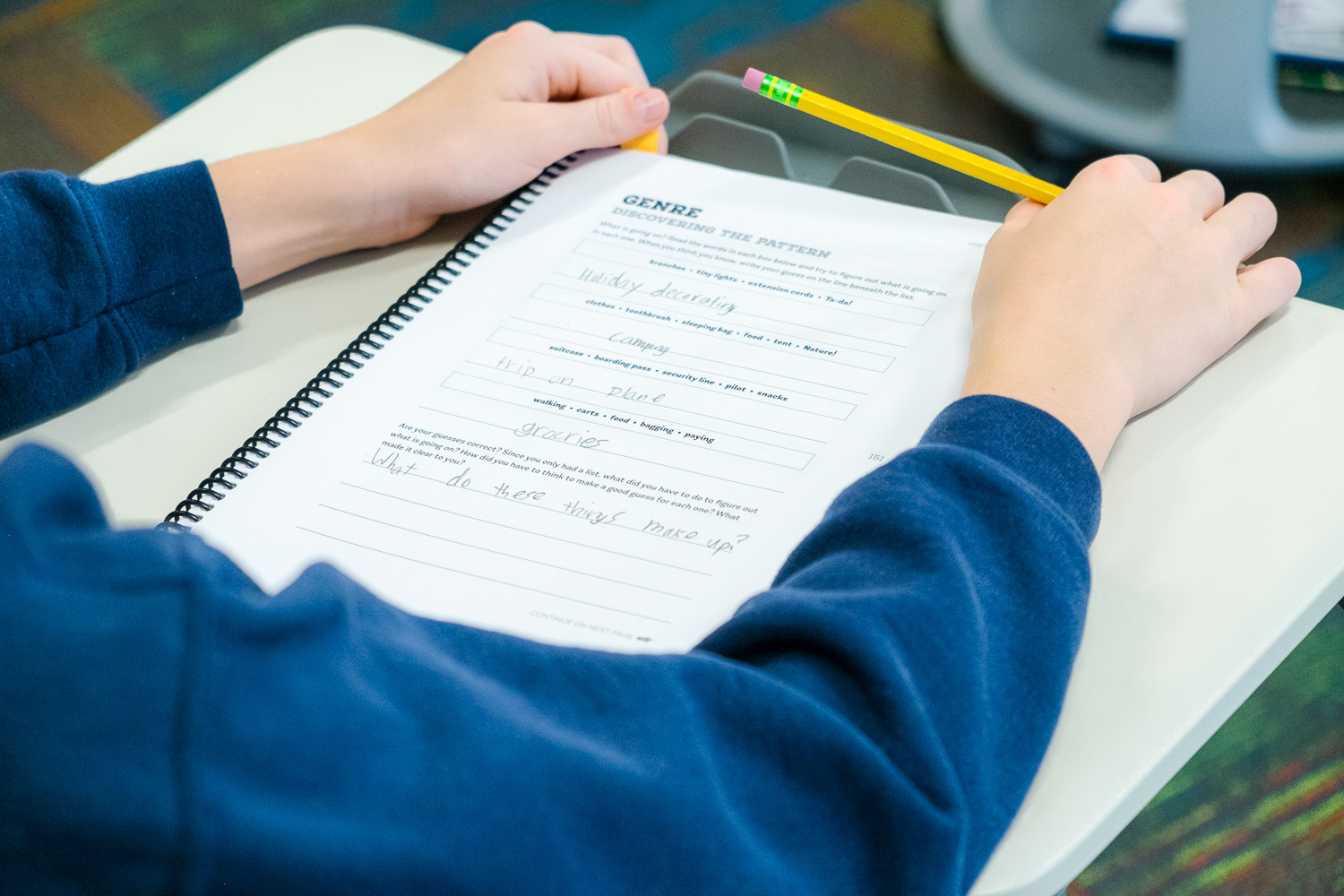 Writer’s Stylus helps teachers and students intentionally strengthen the inextricable link between thinking well and writing well. Imagine the beauty when a young person discovers written expression as a vessel for his voice.

Writer’s Stylus weaves together all essential components of writing and uses a framework that equips teachers to implement best practices daily. Teachers are empowered to be the writing expert in the room, and students grow proportionally under their expertise.

Writing is a transformational process; it is a skill that can be taught and learned by using a well-planned strategy to craft raw material into influential communication. Writer’s Stylus employs a vertically aligned plan for learning to mastery. Here’s what the program model looks like: 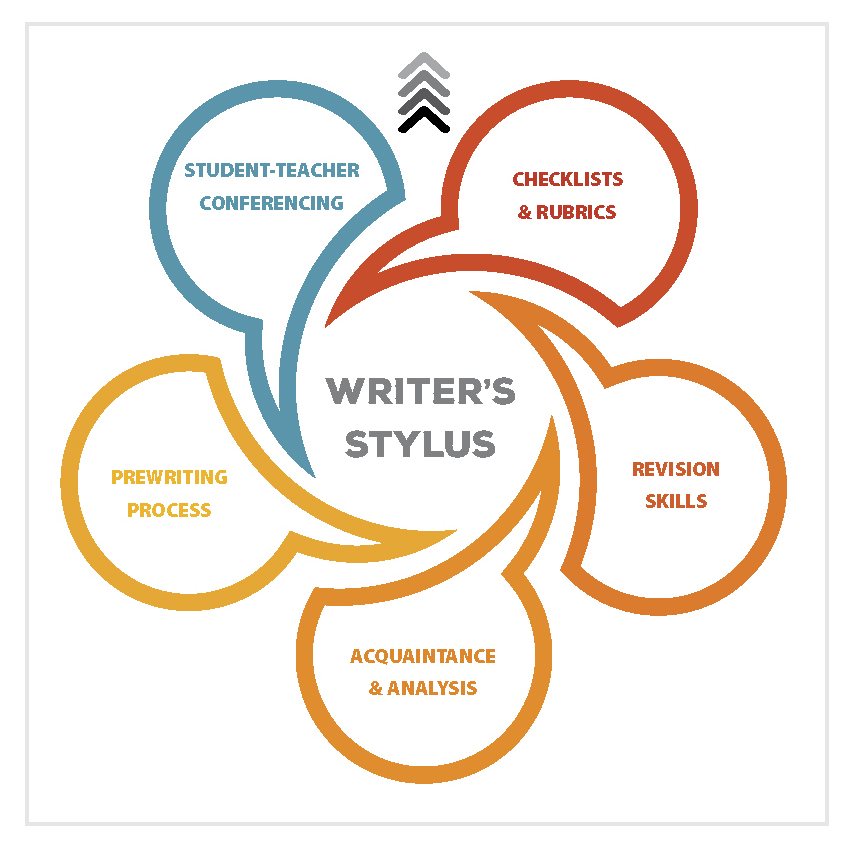 In Writer’s Stylus, checklists and rubrics provide skill focus for teachers and accountability for students to achieve their best.

Mechanics, revision, and genre intertwine within each unit, influencing each other and revealing purpose for each. When students learn specific mechanics skills in order to revise, grammar is suddenly purposeful and not just a mundane worksheet. Teachers don’t have to figure out how to put the pieces together.

Exemplars written by authors demonstrate a standard for students to work toward. Regular exposure to well-crafted pieces develops students who recognize quality writing.

Students use an effective prewriting process to focus and organize their ideas. Practicing this year after year encodes a way of organizing thoughts for effective communication.

Teachers learn to use checklists and rubrics to conduct effective conferences and assess student understanding. Students are given clear steps and bite-sized goals. Using checklists and rubrics makes learning transparent and teaches students that writing is a process and that powerful communication is within reach.

How does Writer's Stylus meet the needs of individual students?

Writer’s Stylus covers all genres present in standardized testing and more. Students follow a process in each unit that enables them to “see” their thinking, organize their thoughts with the audience and genre in mind, and write with focus and clarity.

Since checklists and rubrics are used in every unit, and build year after year, students have an internal checklist to reference and standards to consider while completing standardized tests.

Students also practice writing on demand in every unit, so writing to reflect, respond, and comprehend becomes second nature. Writing is a student’s processing tool.

Where can I find a scope and sequence?

What tools are available for teachers to use in lesson planning?

After completing Writer’s Stylus training, every teacher will have unlimited access to the online Writer’s Stylus Unit Design Tool. More than 100 fully customizable rubrics for every skill and genre give teachers the ability to adjust expectations or increase challenge based upon student needs.

How can I implement Writer's Stylus in my school?

To implement the Writer’s Stylus program at your school, teachers are required to attend the Writer’s Stylus Basic Course. It is a highly interactive, three and one-half day professional development event in instructional writing for school leaders and K-12 teachers of all academic disciplines. Participants undergo a transformation, both personally and professionally, as they experience the teaching methods they will use with students.

What is included in the on-site Writer's Stylus Basic Course?

What does the program cost to implement?

How the Program Works

Implement the program in your classroom

Teachers who complete the Writer’s Stylus Basic Course leave ready to teach their first unit. To most effectively implement this program, teachers will need students to use Writer’s Stylus Student Portfolios available at makewayforbooks.com.

NOTE: Five years later, she continues to masterfully implement Writer’s Stylus with all her middle school students and coordinates Writer’s Stylus implementation for colleagues in all grades within her school.

MANY of my students have told me (either out loud or in their Writing on Demand) that writing is much easier than they thought! Initially, they were wary of writing any type of paper or essay. Now, they are eager to write.

MANY of my students were reluctant to sit down and talk about their writing in a one on one coaching session the first time. They were used to turning in a paper and being “done” with it. Now, most (if not all) look forward to this time. I have had several turn in a revision only to ask 10 minutes later if I have read it and am ready to talk to them about it!

At least half of my students started their first paper (after all the prep work) by asking how long it had to be. My answer was consistent. I would tell them that they knew the requirements on the rubric, they knew their topic, they would need to be the judge about the length. Their paper needed to be “long enough to do the job.” I did not want to give a length as it would end up exactly that length, whether or not it needed to be that length. This question was often asked by students wanting to write the minimum. Now, they no longer ask that question. Seventh grade (the class who has begun Unit 4) had several wanting to write the minimum at before the first writing. Those students will write 4-6 pages on their chosen topics. It has almost reached the point where I need to assign a maximum!

In each grade I have had a handful of students who argued with me about their writing during their first coaching session (particularly about Sentence Limits). I would hear things like, “this is my writing style and I like it,” or “I don’t see a problem with having five ideas in that sentence.” This was particularly true of those students who felt like they were already “good writers.” They had never been asked to revise. They had rarely been asked to proofread. There was a little bit of push back from them. I didn’t understand this completely (I would never have argued with my teachers…but I’m old.) but we worked through it. I also do understand to some extent as writing is a very personal process. This is one of the many reasons I love the rubrics. The rubrics are very clear. They have to keep the same rubric paper, the initial draft, and all revisions together so we both can see their progress. I could refer to the rubric and talk them through their feelings. They could see that I was not criticizing them as people but making suggestions that would make their writing stronger. They could also see that the same set of rules applies to everyone.

Sixth and seventh both started with Slate. Neither class had previous experience with Writer’s Stylus. For my seventh graders, this has been a challenge that they were ready to tackle! They have soaked in every bit of it with open minds. They have learned new mechanics (e.g. appositives) and had excellent reviews to solidify other mechanics that they did not understand completely (e.g. when to use commas with conjunctions, combining dependent and independent clauses).

My sixth graders definitely needed to start with Slate. They needed the most time moving away from their traditional approach. Some of them would much rather have a traditional (concrete) approach where they can memorize material, spit it back out, and move on to the next topic. Even those students are coming around to “my” way of thinking! They have needed more time with revision, particularly with Sentence Limits. We stayed there for a while to make sure we had it down before we moved on.

My eighth graders started with Coral. This was a pretty big leap for them but it has been a good leap. The first unit in Coral will be review for my seventh graders next year but was all new (the revision skills) for eighth grade this year. They have down well with this challenge! The only thing slowing us down in that class is the amount of time we have to spend together. Since it all of the reviewed skills were new to them, their first paper was graded with all of the review rubrics along with the genre rubric. This worked well for them and for me. I could see where they were with their writing and they could make some significant changes quickly. Coral has plenty of material that is new to them along with material that they need to gain some confidence in before we can consider it mastered.

To help them make the transition from the traditional approach to the Writer’s Stylus approach to language instruction, I started talking about revisions in August. I wanted them to be prepared for their first revisions. I also wanted them to get used to the concept of real revisions rather than proofreading. We talked about drafting and how writing starts with revising the draft for all writers.

While the process is different from the traditional approach, my students are adapting rapidly!

Still looking for a little more information not posted here? We’re happy to answer questions by email, phone, or Zoom.